So as the YouTube spiral continues during these quarantine times, another video has me in a nostalgic mood connecting threads of my theater loving life. I recently saw the clip from the Tony Awards© with Jennifer Holliday and the cast of Dreamgirls.

I remember seeing it on TV at the time, processing its fabulosity, while the signature song from the show, And I’m Tellin’ You I'm Not Going, climbs the charts. It made Texas native, Jennifer Holliday, a breakout star.  While living in P.Y.T. Texas (Pre You Tube) , my theater experiences were very limited.  It wasn’t until I moved to Austin from Galveston that I felt comfortable enough to see and participate in more theater locally.  Since my Texas days, I have had many opportunities to meet and interview legends of the American theater and see their work on stage.  However, there are great performances that happen in places other than the Great White Way. They are just as compelling, riveting, and memorable, as if you were walking out of the Imperial Theater on a chilly winter night in 1982. 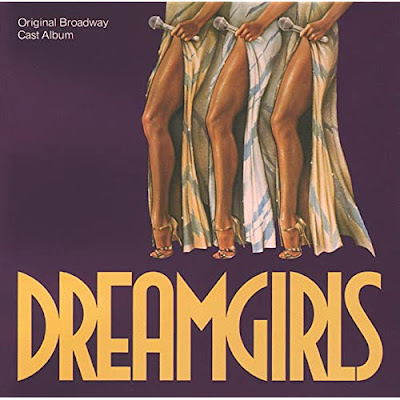 For me, it was a Sunday matinee performance of DREAMGIRLS at the Zachary Scott Theater, Spring 1995. I, along with one of my dearest friends, Len, were volunteering as ushers so we could see the show. Another one of my dearest friends, Ms. Treens, was also the stage manager for the show and kept saying to me, “you are not gonna believe how good this show is!”  She also said “black folks are gonna lose their minds when they see this show.” She was right, because I did not know what was going to happen.   For a community theater, we were living with only having The Wiz, Bubblin’ Brown Sugar,  and Ain’t Misbehavin’ to fall back on as black musical theater performance options.  Once On This Island was performed in the previous seasons, but it was still new to us. It had not earned its current status in black musical theater history just yet.

From the moment the house lights went down and those voices and music turned up, I lost my ever loving mind. Chile, Dave Steakley directed the *ish out of that show.  The gowns, the wigs, and the moving sets turned me OUT! Seeing people of color just sassing it up while singing their faces off was amazing, but I can not forget the performance of the actress who embodied my First Effie White, B. Iden Payne© Award Winner, Jacqui Cross. Honey, I had never seen anyone like her.  At that performance baby, she SLAYED!! She blew the roof off of that house.
In that climactic moment near the end of Act One when everyone gangs up on Effie about her size, missing shows, etc., and Deena is acting all innocent knowing full well she’s been sleeping with Curtis right behind Effie’s back, stealing her place as lead, all while being careful enough to not get pregnant in her quest for fame.  As that scene started, I felt goosebumps because my empathy for Effie was growing. By the time the bells chimed in to start that famous anthem, I was a wreck. It was the first time that I cried in a live performance.

At that time, I was winding down my days in Austin, as I prepared to take the big leap and move to NYC.  I have always been in the battle of the bulge my entire adult life, and this quarantine is not helping. I knew then that moving to New York was the right thing to do. However on that day, the only questions marinating for me: where was Jacqui Cross in that moment, and who did she channel to find the character? Why? Because an angel came out of those vocal chords that day.  The lights came up, and there was not a dry eye in the house, except for my friend, Len. Not that he wasn’t moved, but theater is not his jam like that. I have never forgotten that moment. Don't even get me started with her costume change DURING the I'M CHANGING number. In the audience at that same show was one of Austin’s premier cabaret/piano bar goddesses and local celebrity, Margaret Wright, and even she was doing the Oprah ugly cry at her seat.

At different times during my radio career, I have met and interviewed the 3 Original Dreamgirls, Tony© and Drama Desk© Award Nominee, Sheryl Lee Ralph (Deena), Emmy© Award Winning Loretta Devine (Lorel), and Tony© and Grammy© Award winning Jennifer Holiday (Effie). Each and every one of them could not have been kinder, more generous, and funnier. These sisters are still working on a screen or stage near you.

Looking back, I now know that I needed to experience that performance as a boost for my love of theater. It also reminds me that for every diva that I have seen grace a Broadway stage, there is a Jacqui Cross in their hometown bringing folks to tears, too.  Being blessed to see so many AMAZING performers and shows, I will never forget my first Dreamgirl. FYI, Ms. Cross is still turning it out in Austin, Texas. She still stays very active on the theater and music scene.  Her talent is a testament that great theater performances anywhere will stay with you forever.  Now go wash your hands.
©2020 Keith Price
Posted by Keith Price's Curtain Call at 12:40 AM No comments:

During this pandemic madness and the awaited return of Broadway shows,   I am doing what every theater geek is doing: spending endless hours on You Tube, watching clips of every damn version of every damn thing that we have ever heard, seen, or done, multiplied by 1000.   If you are a theater enthusiast having lived in NYC long enough, in addition to Broadway and Off Broadway, then you know that there is something so amazing and so unique happening on a regular basis, especially with organizations like Broadway Cares/Equity Fights AIDS and The Actors Fund, (which, by the way, are both raising funds to help the many whose profession is the basis of many of our favorite moments. If you have a spare fiver to donate,  and know others who can, collectively you will be helping). Back to me.

In my spiral, I ran across this clip from the Actors Fund production of SWEET CHARITY in 1997, featuring three Tony Award© winning legends, Chita Rivera, Bebe Neuwirth, and Donna McKechnie, in one of my favorite numbers, There’s Gotta Be Something Better Than This


I immediately flashed back to actually being in that audience that night. I had been in NYC for about 2 years, and my survival job at the time was being a bouncer/dj/emcee/janitor/house mother and sometimes choreographer at a strip club.


Yes, I know it might be hard to believe, but at that time many of the older comedians that I admired had worked in a strip club in the early days of their careers.  I felt like I was following a tradition. Not to mention, who would you trust hanging out with female strippers? Lecherous straight guy or fabulous gay guy who can fight, too?

Anyway, after seeing the big event postcards in the rack (remember those?)  at a coffee shop near the strip club, I went back to the club and immediately called the Actor’s Fund and asked for ticket prices.  Cheapest ticket was $150 in the Mezzanine, but Orchestra seats started at $250, so I waited because I had to think about it, because I barely had enough for a mezz seat.  I told one of the “exotic” dancers how bummed I was, because I wanted to go as close to full out fab as I could. That dancer went back to the dressing room and told the other girls. At closing, they ALL went out of their way to tip me extra so I could afford an orchestra seat.

When I called back the next day to order the ticket, I told the woman on the phone my whole life journey from Texas, and how much I LOVED the movie, and how I was a comedian who worked at a strip club, and how lap dancers were the modern day Taxi Dancers, including the story about the ladies and the generous tips. I know that I exhausted her.  I went to pick up the ticket and pay for it with my stripper tips because I did not have a credit card. That fabulous woman gave me a front row center seat, which was misleading, because it was Row AA. In my mind I thought it was the 27th row, after passing through the alphabet once. Imagine my surprise that night at Lincoln Center almost like Cher in MOONSTRUCK?

Cy Coleman came out to play the overture.  The ladies from THE LIFE were singing Big Spender with Chita and Bebe.  Theater Goddess, Gwen Verdon, made her final stage appearance that night. She also fell while smoking a cigarette and hiding in Vitorio’s closet.  Dom Deluise and Charles Nelson Reilly were among the other stars on stage. Debbie Allen’s off book moment cracked up the house. Hearing someone scream, “You better work that ponytail, gurl!” as that young dancer made her entrance for the RICH MAN FRUG number.  Looking back some 23 years later, it still feels amazing.

Because I did not know where my life was taking me after that night, I marvel about how many connections to that night continued so many years later.  At that time, I had been in NYC for about 2 years still trying to figure it out. It was before 9/11, social media, and the beginning of the flip phones. After making my way around NYC as a comedian and a hospital clerk for about 10 years from that magical night, I landed a dream job of working in radio.  One of my first BIG assignments was to cover the book launch party of…..Donna McKechnie.

Guess who else was at that party? Bebe Neuwirth.  I know right?  It was right before they were to announce that Bebe was to return to the cast of CHICAGO in the role of Roxie Hart. Later on in my career, I also got the chance to connect with the great Chita Rivera.

As magical as that night was, it came up again in the most unlikely of places.  My first big relationship lasted shy of 7 years, and began with a few theater conversations.  Upon spending my first night with him at his place, I saw this awesome display on his wall. It was a signed poster from that same SWEET CHARITY concert along with pics of him with some of the stars of that same night.  It was such a sweet moment to realize that we were at the very same event meeting people and possibly passed each other and not even knowing it. No matter how the relationship ended, I will never deny that theater was one of the things that made our relationship fun, and we both can admit it was a good run, and yes, we are still friends.  As this quarantine continues, it seems that I will have plenty of time to remember some really great moments involving the theatre, and I think that I will. In the meantime, do the same and if you can, please check out Broadway Cares/Equity Fights AIDS and The Actors Fund.
Please enjoy some memories from that magical night, too.

Posted by Keith Price's Curtain Call at 6:15 PM No comments: