March Madness is Happening at Feinstein's 54 Below

There are some stand out things to do when in NYC, and Feinstein's 54 Below is one of those places that a theater lover can have an amazing time with some of the favorite Broadway stars.  This march is no exception.  I recently had a chance to talk to some of the people that will be lighting March on fire with their upcoming shows.  Please take some time and enjoy my conversations with these fabulous folks.

JOANNA GLEASON
Tony Award©, Drama Desk Outer Critics Circle Award winner, Joanna Gleason (INTO THE WOODS, NICK AND NORA), makes time for me to talk about her upcoming show at Feinstein's 54 Below entitled, OUT OF THE ECLIPSE. During the conversation, I never thought that I would relate to someone within 3 minutes of being with them. Please enjoy my conversation with the legend.

NICOLE VANESSA ORTIZ
Fresh off of the heels of a critically acclaimed, Off Broadway revival of Smokey Joe's Cafe, Nicole Vanesa Ortiz, makes her Feinstein's 54 Below Debut with her one woman show, BECOMING HER: A DIVA'S TRIBUTE. She and I reunite to talk about her life, career, and her upcoming show, Please enjoy my conversation with this Fierce Diva!!

REBECCA LUKER & DEBORAH GRACE WINER
Sitting in the booth with Tony Award© Nominee, Rebecca Luker, and award winning musical theater historian, curator, producer, Deborah Grace Winer is a blast. Talking about their next collaboration is even more fabulous. Ms Winer is continuing her Classic American Songbook Series with GOT RHYTHM The Gershwin Brothers. Celebrating the great music of the musical duo. Please enjoy my conversation with these amazing ladies.


BETSY WOLFE
I LIVED for meeting the insanely fun and fabulous Betsy Wolfe. She is wild and fun, and her upcoming show at Feinstein's 54 Below, ALL BETS ARE OFF, is no exception. She sits and laughs with me about her life, career, and the new show. Please enjoy my time with the fabulous, Betsy Wolfe.

Posted by Keith Price's Curtain Call at 9:00 AM 1 comment: 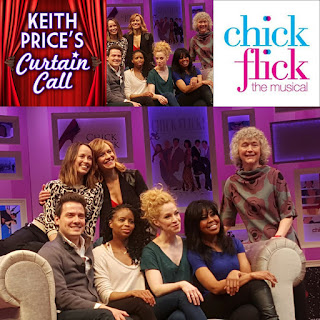 I love new musicals.  A chance to see a new story, to meet new characters, and  to find a new personal theme song are just the perks of getting a chance to explore a new show.  The latest musical to jump in the Off Broadway pool is CHICK FLICK The Musical, featuring Sharon Catherine Brown, Lindsay Nicole Chambers, Carla Duren, and Megan Sikora, under the direction of David Ruttura with a Book, Music and Lyrics by Suzy Conn, Musical Direction by Matt Castle, and Choreography by Sarah O'Gleby.  I went to the press up fronts for the show, and I got a chance to talk to all of the ladies in the show, as well as Suzi Conn.  Because of time I did not get a chance to talk to the show's director and choreographer,  they will be coming at a later date.  In the interim, please enjoy my conversation with my new girlfriends.

Multi-award winning singer/ songwriter and Podcaster, Anne Steele, finally sits down and chats with me about her life, career, finding her tribe, and her latest project, MADE OUT OF STARS. She is absolutely divine.  Please enjoy my conversation with this diva.

Posted by Keith Price's Curtain Call at 9:23 AM 1 comment:

Email ThisBlogThis!Share to TwitterShare to FacebookShare to Pinterest
Labels: Anne Steele, I LOVE MY WIFE Podcast, Kelli Carpenter, MADE OUT OF STARS 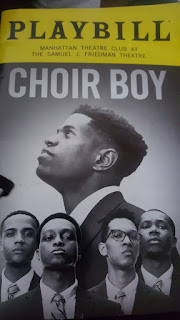 Since I have already told you how much I LOVE the current Broadway Limited-Run Hit, CHOIR BOY, it stands to reason that with a little artful requesting, I would be able to wrangle an interview with somebody from that show.  Having had the pleasure of talking to both of the show's veteran performers, Tony Award© winning actor, Chuck Cooper (Broadway's THE LIFE, PRINCE OF BROADWAY, CHERRY ORCHARD) And Tony Award© nominated actor/director/teacher, Austin Pendleton (FIDDLER ON THE ROOF, LITTLE FOXES, DIARY OF ANNE FRANK), for separate projects, it is a BLAST to have them in studio together.  We chat about this amazing play, their careers, and of course there is always a laugh.  Please enjoy my conversation with the these fabulous folks and try to see CHOIR BOY, if you can.

Posted by Keith Price's Curtain Call at 9:18 AM 1 comment:

Dominique Morisseau: From Off Broadway To An Entire Nation

I have the great fortune to talk to fabulous people all of the time, and Multi-Award Winning Playwright and Screenwriter, DOMINIQUE MORISSEAU, is no exception.  This playwright has taken to the written word to create amazing conversations with her plays like SUNSET BABY, DETROIT 67, SKELETON CREW.  Her recent Off Broadway play, PIPELINE, starring one of my fierce STAGE/FILM//TV Divas, Theater World Award Winner, KAREN PITTMAN, ( Broadway's DISGRACED, Marvel's LUKE CAGE, FX's THE AMERICANS), is being presented by LIVE FROM LINCOLN CENTER on PBS, February 8th, as part of their Black History Month programming.  It is a discussion about the pipeline that is taking young men of color out of our schools and right into the prison system, and some of the forces that could be responsible for making this happen.

In this play, Nya Joseph (Karen Pittman) is a dedicated, inner-city public high school teacher who is committed to her students’ achievement, while she sends her only son, Omari (Namir Smallwood), to a private boarding school. When Omari is involved in a controversial incident which threatens him with expulsion from his school, Nya is forced to reconcile Omari’s rage, her own parental decisions, and the public and private school systems, as she rallies to save her son. After seeing the show, I was glad to see that the production was filmed and showed nationwide in cinemas last fall, streaming on BROADWAY HD.

I had a chance to finally chat with Ms. Morisseau about some of her work, including the upcoming Broadway Musical, AIN'T TO PROUD.  During the run of PIPELINE, I had a chance to talk to Ms. Pittman about the role and the impact of the piece.  Please enjoy my conversation with Ms. Morisseau, and revisit my conversation with Ms. Pittman, and make sure to tune in to PBS.

This was the first time that I met Sarah and Shaina, but Charlie along with his composer/collaborator, Tim Rosser, visited me a year and half ago to talk about THE BOY WHO DANCED ON AIR.   Please enjoy my conversations with Sarah, Charlie, Shaina, Richard Maltby, John Wideman, Maury Yeston, and Alison Fraser.