Up and Away With Jenn Colella

I really do love it when I finally get the chance to sit with one of my favorite Broadway Divas. I have been waiting to have studio time with the Tony Award© Nominee, Drama Desk Award Winning, Jenn Colella for a long time.  While still wowing crowds 8 shows a week in COME FROM AWAY, she took some time from her busy schedule to sit and gab with me about her show, her career, her life, and so much more.  When I found out that Ms Colella also had a life as a comedian, it made me love her more. Please enjoy my conversation with the absolutely fabulous, Jenn Colella.

Flashback with me to our night on the 2018 Drama Desk Awards Red Carpet.

CHOIR BOY Brings Another Experience to the Great White Way 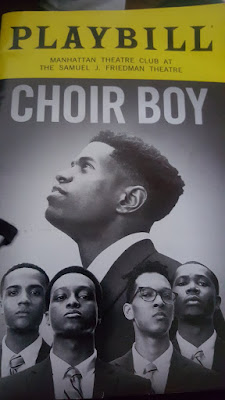 On a Sunday afternoon, the curtain rises on the Samuel J. Friedman Theater for the opening moments of Tarell Alvin McCraney's (Academy Award© winning screenwriter of MOONLIGHT, and hopefully soon a Tony Award© Nomination, too) current opus, CHOIR BOY.  After having a day to sit with what I witnessed, I allowed myself to revel in how refreshing and wonderful it was to see a modern, black, gay, coming of age, storytelling experience that turned me inside out. This play with music is a powerful statement about being committed to self-expression.

The story begins at the graduation of seniors with a song being sung beautifully by Pharus, a junior in choir, played with snappy pitch perfection by Jeremy Pope (Off Broadway's CHOIR BOY, THE VIEW UPSTAIRS).  While singing publicly in his choir, he is insulted by one of his choir mates, Bobby, a menacing and layered performance by J. Quinton Johnson ( from Broadway's HAMILTON), during the performance. It is clear that there is a history between these two guys that started long before the play actually commences.  Also in that same choir, are Junior, Bobby's side kick, played with some great comic relief moments by Nicholas L. Ashe (Broadway Debut), and "AJ", Pharus' patient and understanding roommate, played brilliantly by John Clay III (Broadway Debut). Their levels of support to their friends are tested, along with their pivotal and tenuous relationship with fellow student, David, played by Caleb Eberhardt, also in his Broadway debut.  Tony Award© Winner, Chuck Cooper ( THE LIFE, PRINCE OF BROADWAY) serves the role with regal, paternal brilliance as Headmaster Morrow, and Tony Award© nominee actor/director/teacher, Austin Pendleton (FIDDLER ON THE ROOF, THE LITTLE FOXES), as Mr. Pendleton, gives a stunningly comic and layered heartbreaking performance.

Not to give too much of the story away, because it honestly needs to be experienced from beginning to end without a lot of spoilers, but a conversation may start about the damaging effects of homophobia within the black, religious community, or even toxic masculinity.   Another highlight is witnessing the bravery of a young, black, gay character living his truth against that adversity. There are fantastic moments of drama balanced with very slick comedy, which keeps the aforementioned highlights from being forcefully didactic.  To see all of this on a commercial Broadway stage, gives me a great sense of pride and hope that there will be more stories like this one down the road for the Great White Way.  Director Trip Cullman (LOBBY HERO, SIGNIFICANT OTHER, SIX DEGREES OF SEPARATION)  takes Mr. Mc Craney's beautiful story and literally makes it sing with musical direction of Jason Michael Webb (THE COLOR PURPLE, MOTOWN: THE MUSICAL).
The transitional moments using those amazing voices and songs give more power to the story, and like a good musical those songs do move that narrative. Choreographer Camille Brown (ONCE ON THIS ISLAND, A STREETCAR NAMED DESIRE) keeps those choir boys popping with some moments that feel like a respectful dance homage. During one number, I was transported back to college watching the Black Greek step shows, and in another, I got some 70's R&B movement like the Chi Lites or The Temptations.  Costume and Scenic Designer, David Zinn ( BOYS IN THE BAND, SPONGEBOB SQUAREPANTS),  makes great use of the space of the Friedman Theater, and he dresses the guys in great modern private school attire that certainly moves well. Unfortunately this is a limited run until February 24th, so if you want to see an amazing story being told by amazing people with amazing voices, then get thee to the Samuel J. Friedman Theater and see CHOIR BOY.  In the meantime, I am going after some interviews with this cast before the run ends.